Herc Operations recently cemented its relationship with RAF Brize Norton when its crews started training personnel from the Luftwaffe on the C130J simulator in November. Speaking for HercOps’ Training Manager David Catlow, a former RAF C130 pilot himself and recently retired senior RAF officer, said, “this has been a great start for HercOps” C130J training at RAF Brize Norton’s Air Mobility Hub. We’re delighted to be able to provide training to international partners utilizing the spare capacity of the C130J Dynamic Mission Simulator. It’s widely acknowledged that International Defence Training enhances the UK’s reputation as a centre of excellence globally, but sometimes operational demands don’t allow the RAF to carry out this recognized MOD task organically. That’s where HercOps steps-in; providing first-class training, whilst also providing a revenue stream into the MOD.

HercOps staff, all with significant operational experience of the C130 in RAF service, have been training the Luftwaffe since early November, which has not been without challenges given the current COVID constraints. HercOps completed the first training course in around half the planned time, thanks to the flexibility of XXIV Sqn, the RAF’s Air Mobility Training Sqn, and some nimble work from the HercOps ops team. David Catlow described being back working alongside the RAF at RAF Brize Norton as an absolute pleasure. “We’re here for the long-term and it’s great to start on a such a positive note.”

The Luftwaffe’s Lieutenant Colonel Maik Drescher, the first student, was a previous C130J exchange officer with XXIV Sqn and is now off to be the German Chief-of-Staff of the new combined Franco-German C130J squadron in Evreux, France; he also thoroughly enjoyed his time back working on XXIV Sqn. 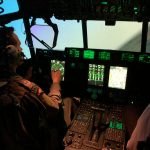 The HercOps team is keen to highlight the international nature of its training and building long standing relationships with international military partners is critical to its business. This is demonstrated by HercOps’ sister-company HeliOps, which has delivered helicopter training to the German and Norwegian Navies from its Portland HeliPort and Culdrose Simulator over some years now.